I had last visited Mamallapuram (Mahabalipuram then) near Chennai as a 8 year old kid and saw all the world famous historic monuments there but most of the memories have been restricted to a couple of grainy east man colored photos which are almost fading away. So it was time to make new memories with my wife and my 4 year old son. So we head out to Chennai in the grueling summer but our solace was in the fact that we would be staying at the most famous resort there which is Radisson Blu resort temple bay, mamallapuram managed by GRT hotels. 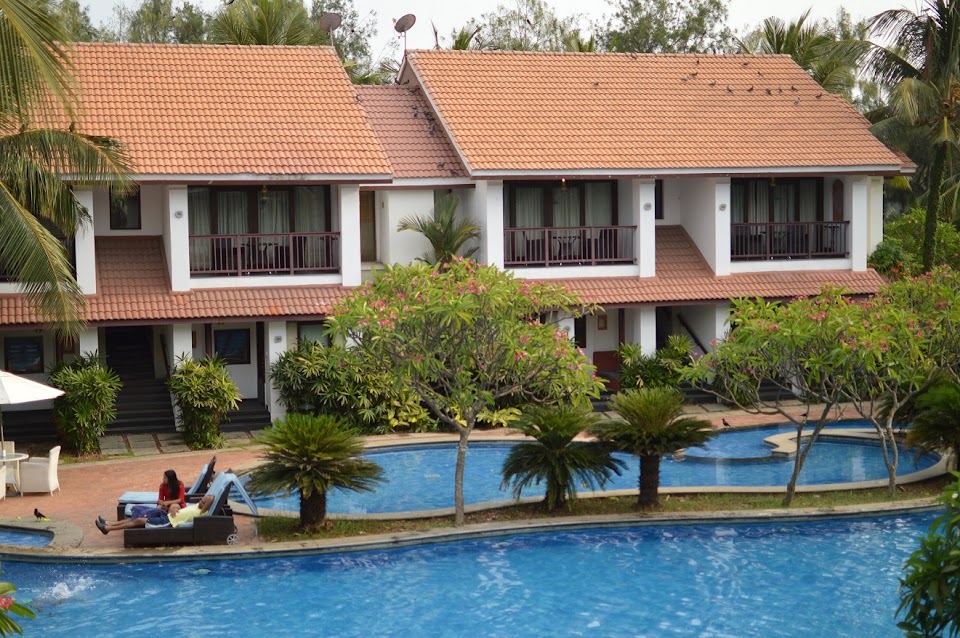 Radisson Blu resort Temple Bay is just a 56 km drive from Chennai along the picturesque East Coast Road and is
located in the seaside town of Mamallapuram (as Mahabalipuram is now known) on the Coromandel Coast. What surprised me pleasantly was the sheer size of the resort which is spread over 45 acres with a breath-taking view of Bay of Bengal and the world-famous Shore Temple. The resort’s outstanding feature is its largest meandering swimming pool of 27,000 sq.ft. and an infinity pool that merges into the bay. 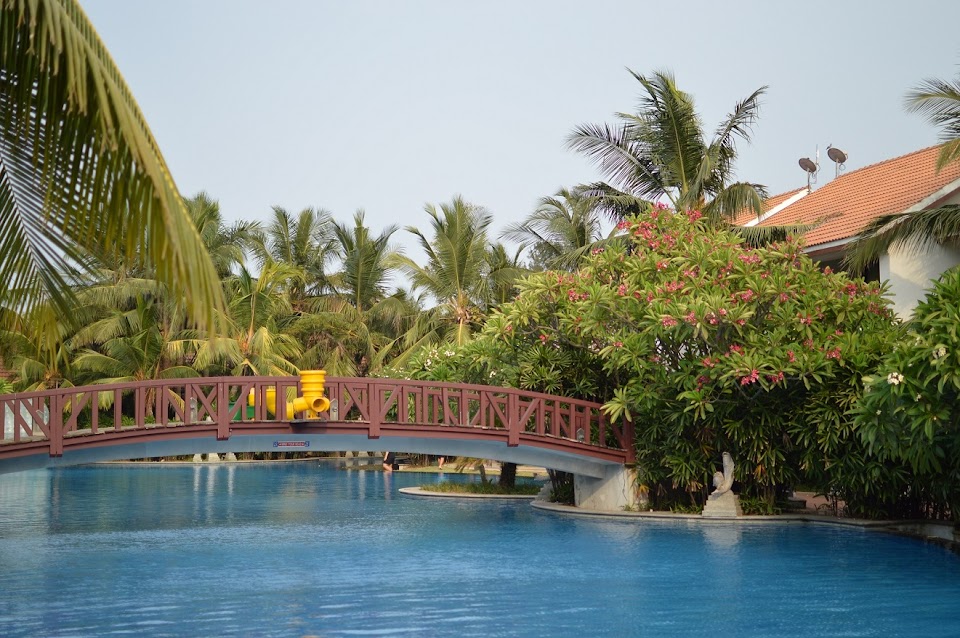 On invitation from Radisson Blu resort Temple Bay, we stayed in the Sea View Chalets which are around 495 SQ. FT. These chalets are modern and spacious with panoramic views of the sea. We could just unwind by the open porch and gaze at the sea, with the majestic Shore Temple in the foreground. There was buggy service available for seniors, kids or those with luggage. The wonderful green walkaways were great to walk on too. 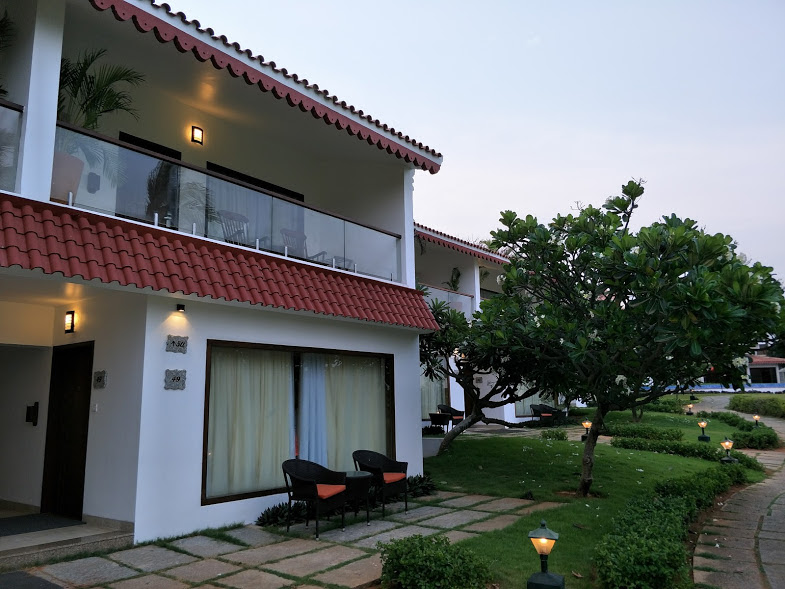 We stayed on the 1st floor Sea View chalet which had a nice balcony outside the room which had couple of chairs you could relax on while sipping coffee during Sunrise or cocktails during Sunset! The exquisite decor pleased us all. 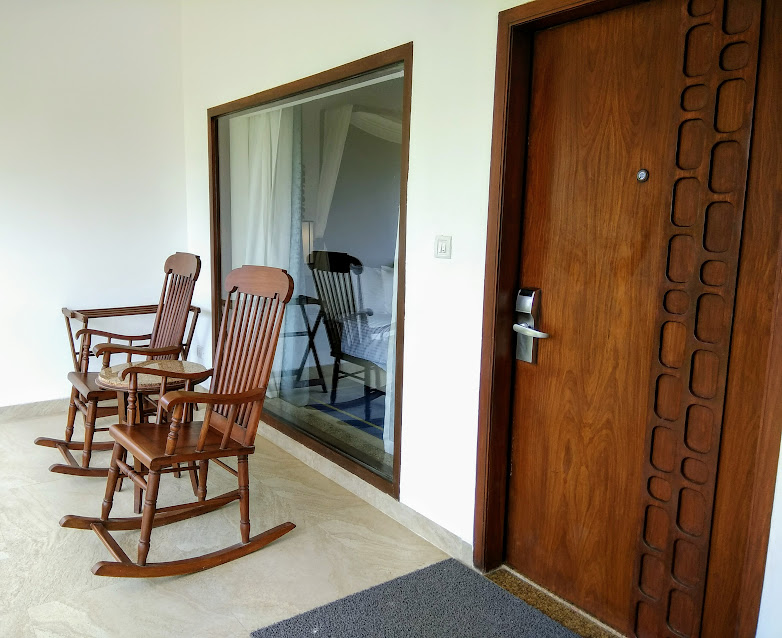 Once inside the room, I was pleasantly stunned by the tasteful decor of the room with bright colors and colonial look. The Sea View chalet had a sitting area inside along with a queen size bed and sliding doors for the tasteful bathroom which had a nice bath tub and separate areas for shower and WC so that two people could use it at the same time without disturbing each other. 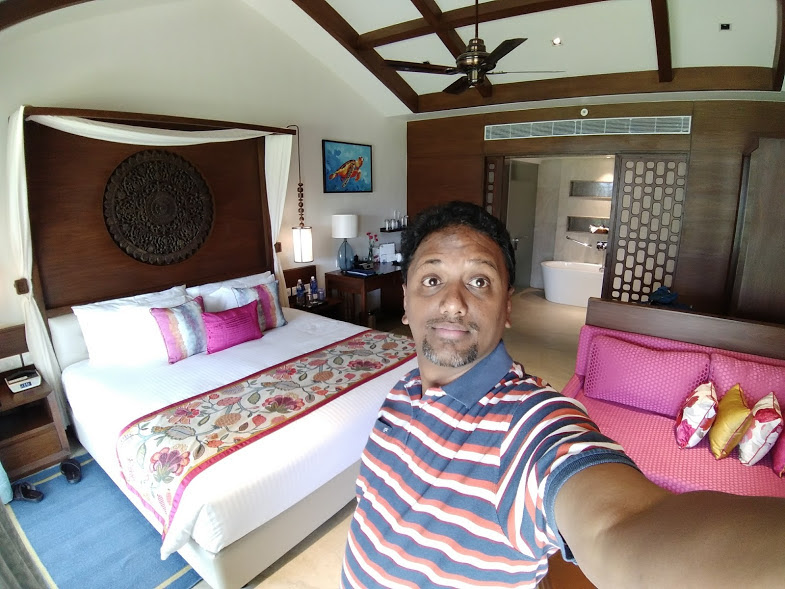 The decor is inspired by the Sea and I was happy to see paintings of Sea turtle as it reminds us of the ocean and also the initiative by the hotel to conserve sea turtles. The bed is good for a couple and a kid younger than 8 years old. 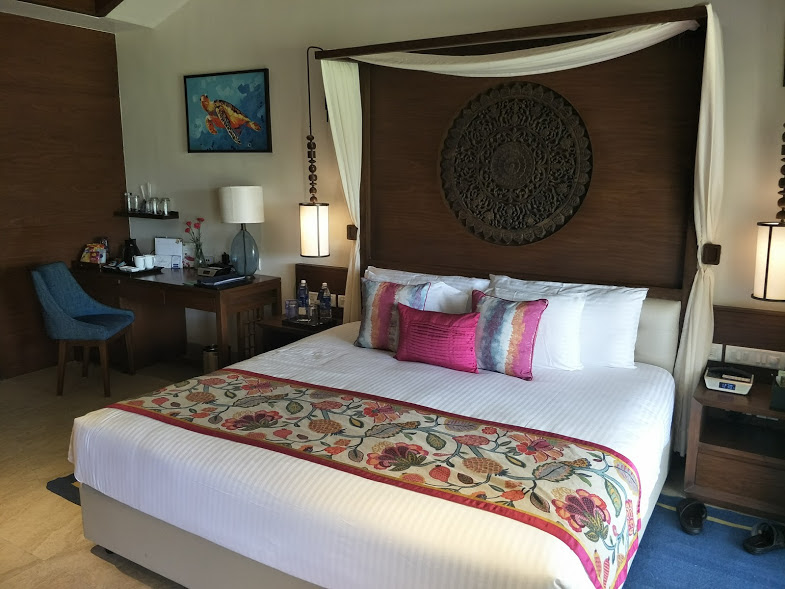 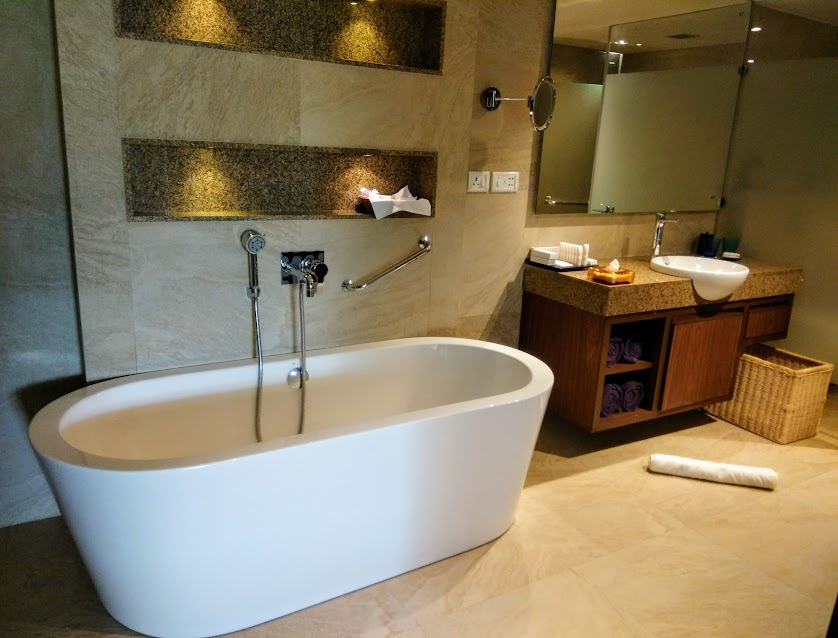 Radisson Blu Temple Bay resort cares for your health always and that’s why upon welcome, they provide a fruit basket with all types of seasonal fruits. They also take care of your sweet tooth by providing home made chocolates. 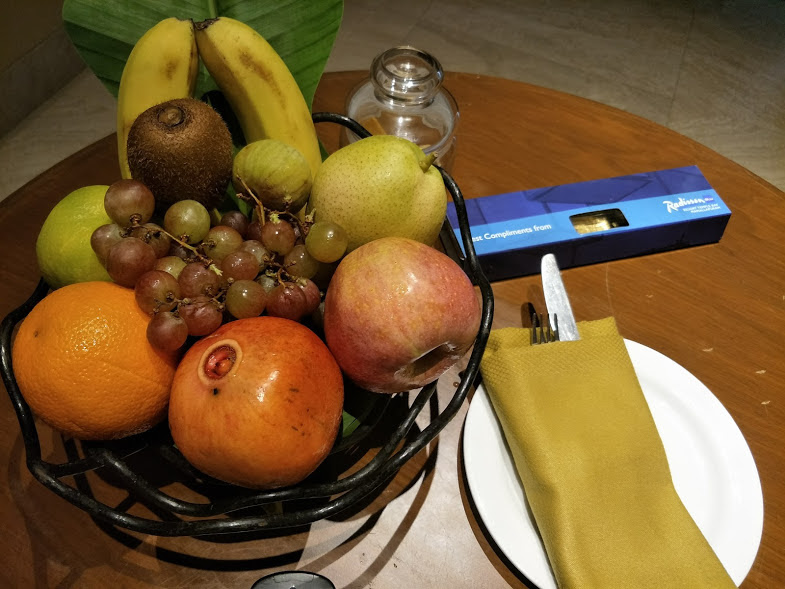 This was the wonderful view from our room of the sea and the gardens around the beach. It’s great place to just walk down the beach for an early morning or late evening stroll. 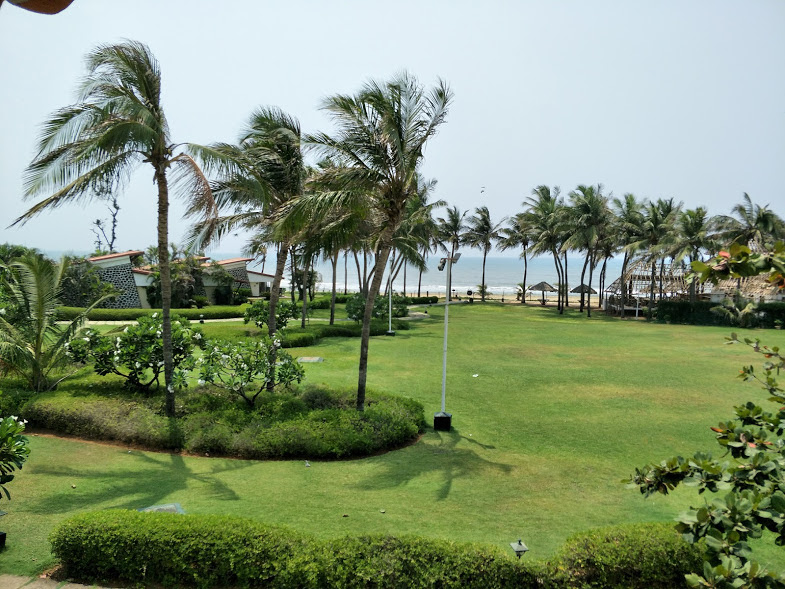 Major UNESCO World Heritage sites like The Shore Temple, Arjuna’s Rathas and more are within walking distance of the hotel. Hotel will also provide car facilities if required. This is us at the Arjuna’s rathas which you can also see below as 5 rathas. 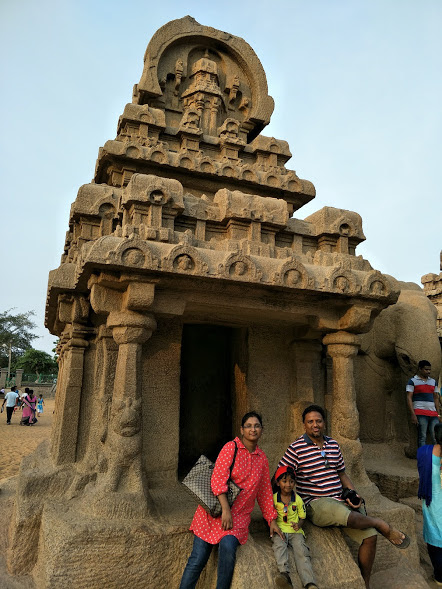 Pancha Rathas is an example of monolithic Indian rock-cut architecture. Dating from the late 7th century, it is attributed to the reign of King Mahendravarman I and his son Narasimhavarman I (630–680 AD; also called Mamalla, or “great warrior”) of the Pallava Kingdom. An innovation of Narasimhavarman, the structures are without any precedent in Indian architecture. 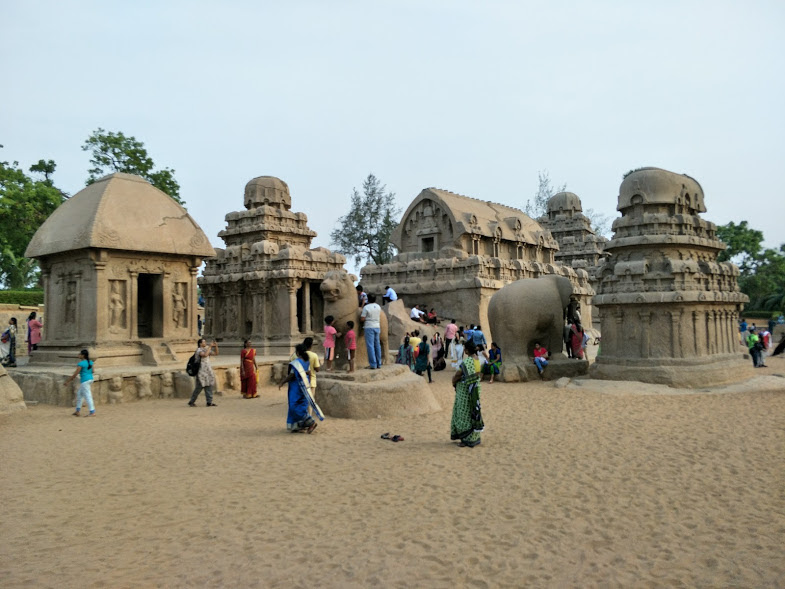 We also visited Arjuna’s penance or Descent of the Ganges, which is a monument at Mahabalipuram. Measuring 96 by 43 feet (29 m × 13 m), it is a giant open-air rock relief carved on two monolithic rock boulders. The legend depicted in the bas-relief is the story of the descent of the sacred river Ganges to earth from the heavens led by Bhagiratha. The waters of the Ganges are believed to possess supernatural powers. The descent of the Ganges and Arjuna’s Penance are portrayed in stone at the Pallava heritage site. It is supposed to be second largest in the world after Angkor Wat in Cambodia. 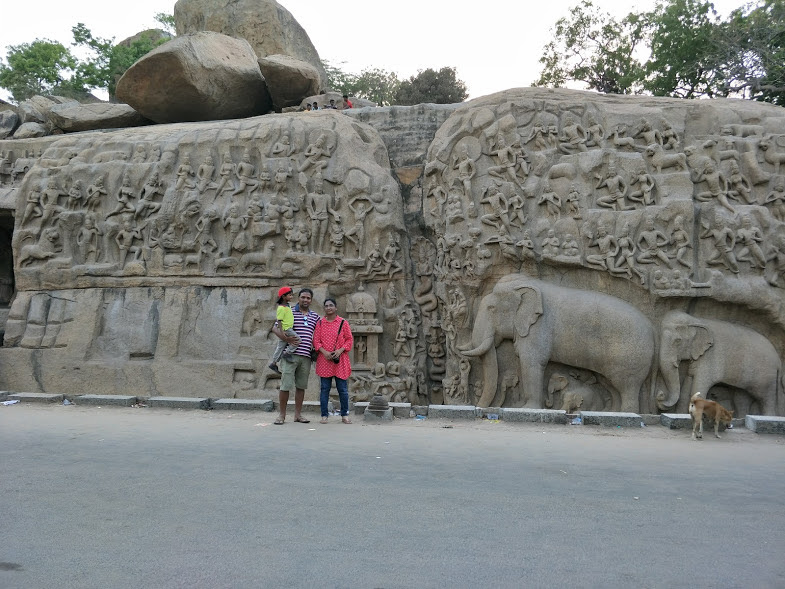 One of the exciting activities that you can take part in Radisson Blu Temple Bay resort is the catamaran ride which is generally held in the morning. 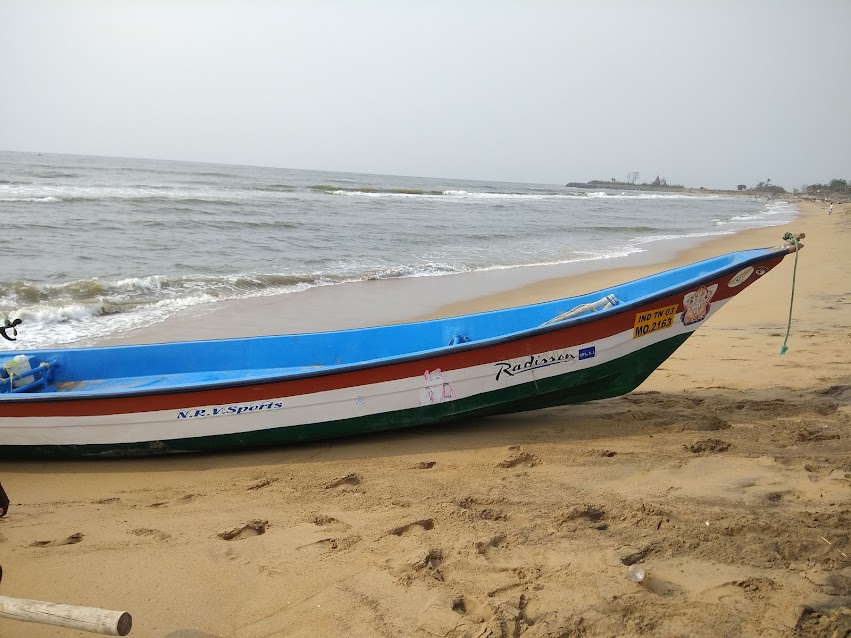 In the catamaran ride, you will be taken on a ride on to the open seas with expert fishermen. This ride is only for people above 10 years of age and it is conducted only if there is no turbulence in the sea or high tides. 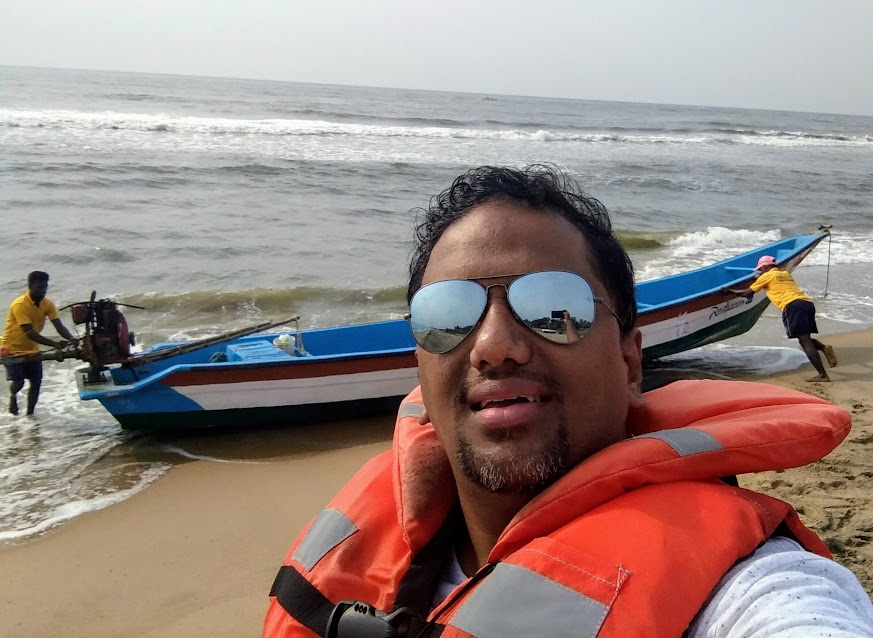 One of the fun activities you can do while on the ride is fishing which the fishermen will teach you by providing the nylon fishing wires, bait in form of prawns and of course the hook. We ended up catching a good haul which is generally then given to some poor people in the village town of Mahabalipuram. 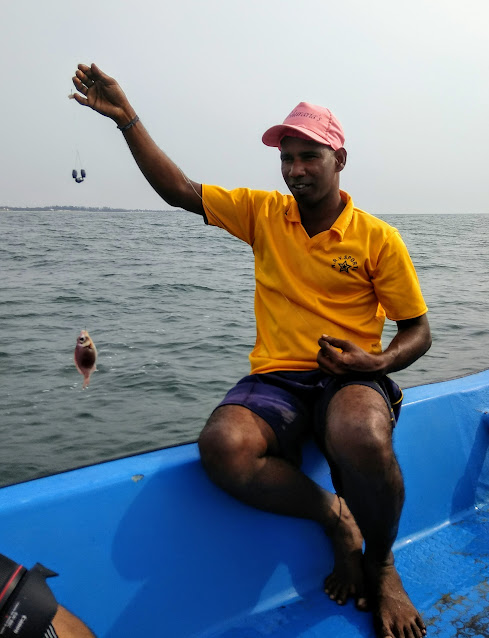 Another fun activity is they will ask you to jump into the sea after taking you out into the open sea. This will help you lose fear of water as you would be wearing life jacket and expert fishermen are by your side. We avoided this activity due to fear of getting stung by jelly fish. 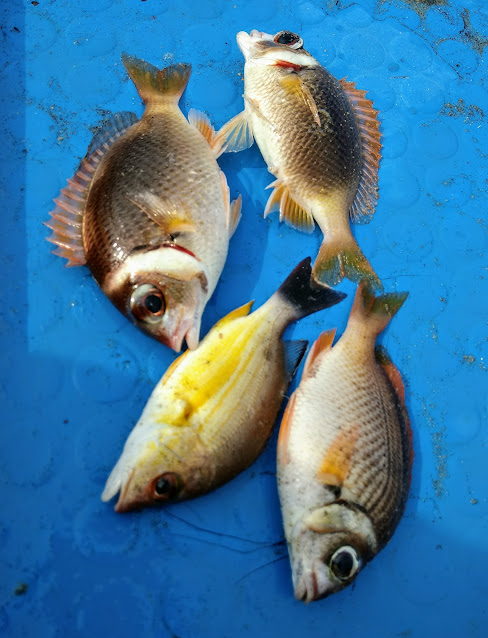 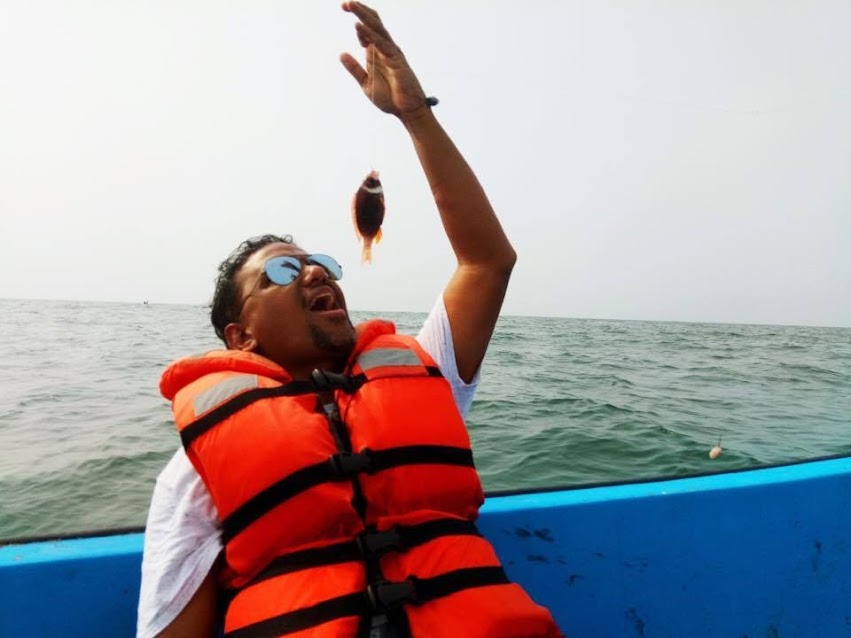 One very exciting thing we saw during the catamaran ride was the top of the submerged temples of Mahabalipuram which were part of the same temple complex as the shore temple. During the fateful Tsunami in India, these temples were visible due to low tide but since then they are only accessible if you scuba dive and that too with permission of the government. 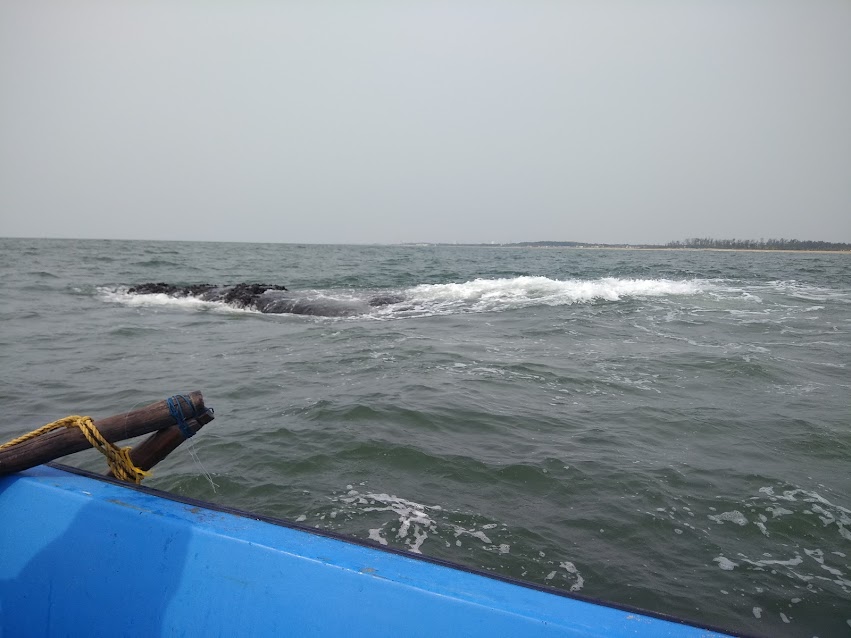 Overall, we had a wonderful time at Radisson Blu Temple Bay resort thanks to it’s great location, wonderful hospitality and exciting activities on offer. For couple of days, we were totally cocooned from the outside world and were pampered in the lap of luxury. Would definitely recommend this resort for at least 2 days and 1 night trip if you are visiting Chennai or Pondicherry. A perfect blend of leisure facilities alongside state-of-the-art conference and wedding venues, Radisson Blu Resort Temple Bay is an ideal getaway for both corporates and families. 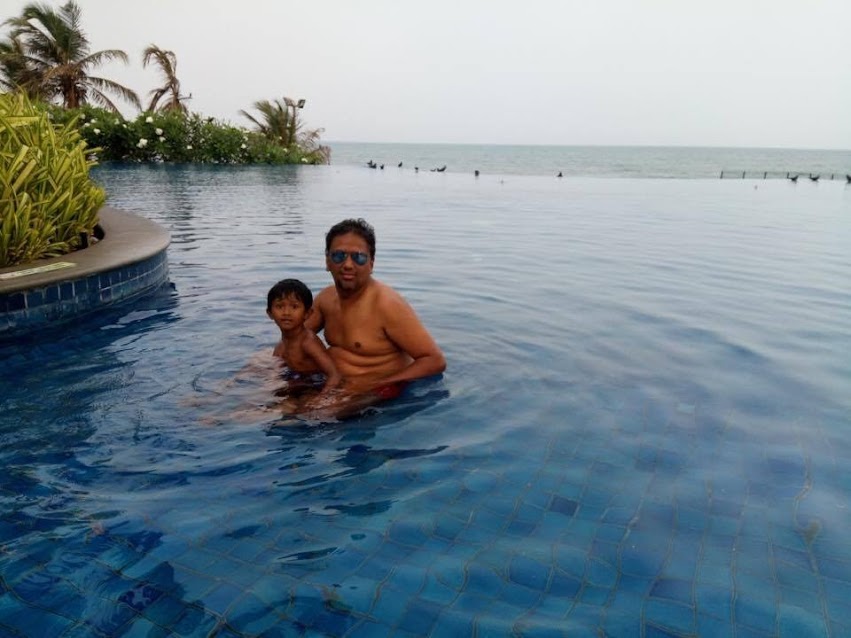 This post originally appeared on dhempe.com and can be read here. Hrish Thota, popularly known as Dhempe on Twitter, is a social media maven and photo blogger from Bangalore. He is oft-quoted in press articles on issues related to blogging/social media.